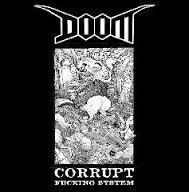 The originators of UK Crust Core return to blaze some extremely legit raw crust core. Nothing mysterious, noisey, experimental or funky here, just raw primal crust core with roots in Discharge and Anti-Cimex. A lot of people were skeptical when Doom toured the USA and headlined Chaos and In Tejas, but they proved that they still had what it took and the Tour 7" sold out in a heart beat. This LP demonstrates that a band that's running for 20 years can still deliver the goods, and you ask why? Because the system of injustice and exploitation that inspired some young punks in the 80's is still screwing over the working class for the benefit of the privileged few. The lyrics are hitting the nail on the head again and again, because as the Varukers said "nothing's changed" so it's time to crank it up and stick two fingers in the air to CORRUPT FUCKING SYSTEM!

Gatefold LP with a poster.