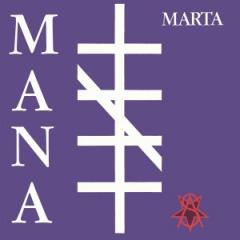 Mana Mana is barely known outside Finland. And I wouldn't know them if I hadn't been in a Helsinki record shop and flipped passed their LP, only to have Markku Hirvela pull the record out, put it in my hand and tell me "You need to buy this record" I replied "I don't know this band, is it punk?" He replied "not really, but you really need it anyway". I got home from Finland and spun the record, Mana Mana is a mix of rock, punk, goth and metal, not really easily categorized, dark, heavy brooding, crawling music with tons of power (three guitar players?) The singer was a tortured soul who spent a lot of time in the hospital and eventually committed suicide. The story I heard was that he was locked up with a woman who thought she was Mary of Magdelene and that's how the lyrics to this single came about. The 7" version is a bit faster and less metal sounding than the LP version (which I like better) and I think they only had two guitarists on this recording, but I'm no expert on this band. That's a rather long description for this webstore, this is a unique sounding band if what I've written interests you check it out, if it seems like a bunch of nonsense, we got Rattus LPs in the same shipment.