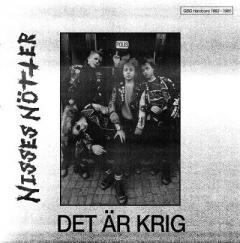 This LP copiles both cassettes from this young and energetic Swedish hardcore punk band. The 1983 demo (originally on AGG tapes) on side 1 captures them in the roles of "Swedens Youngest Punk Band" as the members were something like 13 years old. These tracks are full of raw energy and exuburance, they really do sound like they were executed by 13 year old kids. This material is more on the punk side, while the next leans more into hardcore. The second side from 1985 is a second tape release, which sees the band maturing (they were what 15 or 16 now?) with a heavier guitar sound and beefier riffs a little closer to the Swedish hardcore sounds popular at the time. (think Avskum)