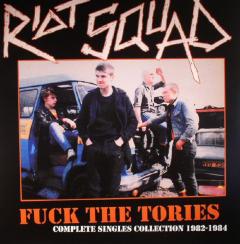 This Lp collects all the singles by UK band Riot Squad. I've always really liked Riot Squad, and  this record brings back some fond memories of a mix tape I made of this bands singles in the 90's. they started out with the same catchy UK 82 sound that their peers played, but progressed to a faster heavier sound, without veering into metal. Although this band took a lot of cues from the Exploited they still manage to have a solid soud of their own, and aren't nearly as cartoony as the Exploited.