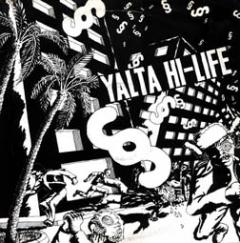 Here it is at last. A legit re press of this Finnish hardcore classic from 1984. This is repressed under license by Power It Up records of Germany with North American distribution by Havoc. I know that comps get a bad rap these days as random assemblies of bands "throwaway tracks". You have to put yourself back in time to the good old days of 1984 when hardcore was still a new, raw and urgent form of music. At that time comps made  a lot of sense to document the explosive new scene and most bands chose their BEST songs to put on a comp rather than their worst. Yalta Hi Life was originally released by Finland's Barrabas records in 1984. Featured are three to eight tracks each by Terveet Kadet, Varaus, Aparat, Kaaos, Aivoproteesi and KTMK. I'm particularly fond of this style of comp because you get about a 7" worth of material from each of the six bands. The TK and Kaaos songs are raging, and most people will probably buy this because those bands are pretty well known. KTMK is at their most hardcore/punk sounding on this release. Varaus can't be touched on any format. Aparat is not so well known, but still tear it up. And Aivoproteesi are really good and pretty unknown outside Finland as I think this material is their only release. A really solid comp start to finish if you are a die hard or just getting into 80's Finnish hardcore.