What you See is what you get 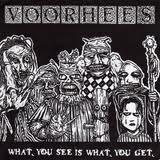 Another haul of unplayed stock copies from 1997. Voorhees created quite a stir in the early 90's when they bucked the trend (which at the time was emo, pop punk, grunge or crust) by playing hard charging 1981-82 Boston style hardcore. Their first Lp back cover was even an homage to the back cover the SSD Lp. This 7" continued in the 82 hardcore trend, with fast early Boston HC influenced tracks, a Crucifucks and a Mc Donalds cover.