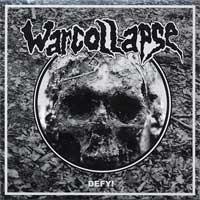 The Swedish gods of crust break their half-decade of silence to unleash a new masterpiece of epic proportions. Twelve brutal new songs that layer new realms of gutteral intensity to the traditional Swedish d-beat KÄNG of the likes of TÖTALITAR, KRIGSHOT, WOLFBRIGADE, etc. And of course there is plenty of the traditional WARCOLLAPSE sound that emphasizes mournful dirges, captivating guitar leads, and vocal style that is as primal as it is gutteral. If you are a fan of their previoues releases then this will certainly not disappoint - delivering all the goods than made WARCOLLAPSE a name among legends. Their previous titles include the Crust As Fuck Existence CD on Distortion Records, Divine Intoxications LP/CD on Mind Control, split EP's with DISRUPT and EXTINCTION OF MANKIND and a number of other EP's, a live 10" and video, plus several compilation tracks.