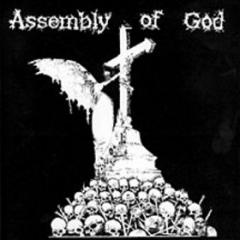 Assembly of God was a hardcore punk band from Oklahoma (none of the members lived in the same city, they all met in Oklahoma city to practice). Chad from Brother Inferior sang and played guitar, with the Drummer of Burnpile and the Bassist of Subsanity. Burnpile being a fast SEHC band, Subsanity a grind band and Brother Inferior a punk/hc band you can see that there are several different musical influences coming together on this release. That said, I would liken the sound mostly to the last Brother Inferior material, which was much faster and more aggressive than the earlier more anthemic stuff. Assembly of God recorded this 7" and some comp tracks and sadly, broke up. They only played a few out of town shows, one of which was Thrash Fest 2. Chad went on to form the Levelling which took things into an even faster realm. As with all of Chad's projects you can see that much thought was put into the lyrics. Chad has always approached issues from a very punk working man's perspective. His no nonsense point of view makes for lyrics that hit the nail on the head every time.