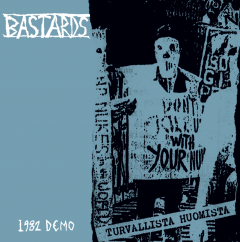 This material has been released several times under different names, it is the "Harhaa Kasset LP" of 1982, later re dubbed 82 Demo. I think that's a bit misleading. technically a demo is a "demonstration tape" sent to labels or promoters as a sample of the bands music in order to solicit recording deals or gigs. This release was more of a full studio recording, 26 tracks, just that in the economics of 1982 hardcore in  Finland it didn't make the jump to vinyl. Regardless of how we label it, this is some crtical 1982 Finnish hardcore. Bastards were one of the foremost bands of the style along with Kaaos, Riistetetyt and Terveet Kadet. This record captures them in a raw and powerful state, delivering energetic hardcore punk. All the trademark elements of Finnish hardcore are here, the strong UK punk influence, the distorted guitars, reverb, the wild drumming, the shouted punk vocals, and the occasional maniacal laughter (hahahahaha). The riffs and compositions here are well developed and really it's kind of making me wince to label this as a "demo" like it's some rough practice room recording as the band has arrived here fully formed, the sound quality is not up to the standards of Led Zeppelin or SGT Peppers, but it's also not a boombox recording from the basment.