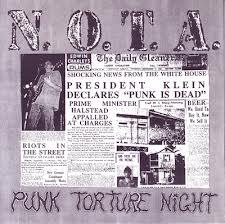 Anyone who knows me is aware that I don't really care for split records (despite the fact Destroy was on two) but this split was sort of a natural. Tulsa Oklahoma has produced two excellent hardcore punk bands in the last 20 years and here they are on one record. None of the Above were one of my favorite bands in the 80's powerful hardcore that was very catchy and lyrics any working class punk kid could relate to first hand. The songs here show a more matured NOTA who have mellowed somewhat but still are very catchy. NOTA put out an LP on Rabid Cat around '84 that is a hardcore classic. There was also the Moscow 7" and Toy Soldiers 7" from the same time period. NOTA's reunion period saw the release of this 7" as well as the HellHole EP and Give 'Em Enough Dope CD,  which includes a killer live set. lso re issued the Live at the Crystal Pistol cassette on vinyl NOTA have since broken up again. It's most unfortunate the the 1985 LP and both original 7"s are still out of print due to contractual reasons. NOTA is one of the very best bands of the 80's and I will put cash money on the table any day to re issue these classic gems. Until then, dub or download the 1985 LP if you can, crucial!