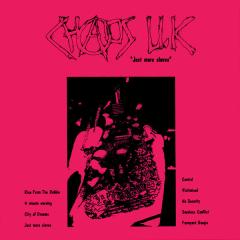 Chaos UK toured Japan in 1985. This LP was originally released as a Japanese bootleg of the set on that tour. This might have been one of the most important tours in the history of both Japanese and UK hardcore, because it exposed a whole generation of Japanese fans to the wid and noisy Bristol Style, while Chaos UK was exposed to the new sounds of Japanese hardcore and then popularized the Japanese bands in the UK and USA.