And the Dirty Little 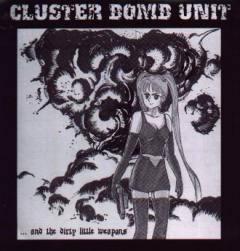 From Stuttgart, Germany, Clusterbombunit plays brutal Dis-core which reminds me a lot of Discharge's Why? 12" with maybe more added crunch and brutality. The lyrics are bleak and desperate to match the muisc, dealing with the insanity of war and oppression. CBU have a 7" and 10" on Thought Crime Records from Berlin and a long out of print split flexi with Resist, a split 7" with Disclose, a US tour ep and a split 7" with RAGG. They have done European and US tours. This 7" was recorded in 1997 for Pushead's label and finally saw the light of day on Havoc. CBU is one of my absolute favorite bands of the 90's and probably the best band I saw live in Europe on tour in 1999 (well, tied with DS 13). CBU released a new LP on Tribal War Asia in the summer of 2001, and the Last Band Standing EP in 2003. Clusterbombunit is one of those bands that no one is on the fence about. Those who like this band are really into them, the intensity, power and brutality of it all. Everyone else, just doesn't get it. If you can dub or download the 10"especially, check it out. For more info and some free MP3's go to the [URL]http://www.clusterbombunit.com|Clusterbombunit Website|EXTERNAL[/URL]