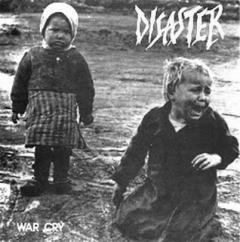 Finally back in print (this was hard to get even when it was new) classic UK hardcore in the Discharge tradition. In the late 80's when first and second wave hardcore was winding down, most people turned to, Crust, Death Metal or Grindcore, for energy and excitement. But these guys turned the clock back to 1983 and the masters DISCHARGE. In doing so they paved the way for a whole subgenre "dis-core" and many bands who followed like Discard, Diclose, Disfear, Dischange etc. I was so excited about this when it came out, because Discharge has always been my favorite, and say what you will about "dis core" as a sub genre, at least it's a whole subgenre imitating the masters of the form.