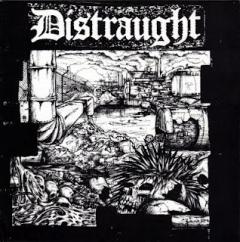 Distraught was a tough hardcore punk band from New York City. This 7" was Distraught's first vinyl release after their tracks on the Pogo Attack comp LP. Distraught featured ex members of Jesus Chrust, Denied, Final Warning and Hell Spawn. Distraught's sound is hardcore in the Discharge/Varukers tradition. Distraught toured several times but were never very well documented on vinyl. Their only other release was a split 7" with Thulsa Doom on Doomed Records. Distraught broke up in 2000. No one was happy with the mix on the first pressing of this record and the second press was re-mixed and includes a bonus track. Todd is now playing in Thought Crime and Sangre De Los Puercos. Steve moved to Providence and has a new band. Huckleberry builds choppers and muscle cars and is a union rep at a car dealership. After we sold out of the second pressing there were still a few of the poster sleeves left so I did a final pressing of 75 copies. The band is long broken up and the poster sleeves were really expensive to print, so this one is out of print forever. This is one band that I wish had gone a lot further, but never rose beyond local/cult status.

Side A: Staring at the Sun
Side B: Power/ Life Through a Hole