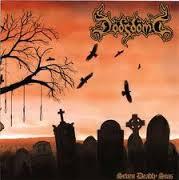 Found a few copies of the double 7" version on Blue and Yellow vinyl in the storage room. Unplayed stock copies.

Rampaging Swedish hardcore or "råkäng" if you will. Straight ahead and powerful hardcore with snarled vocals, hammering riffs and a d-beat that cracks like a whip. This is a concept record of sorts based on the "Seven Deadly Sins" with a song for each sin. The band recorded two versions of the record, one with lyrics in Swedish and on in English. There is also a limited version with both 7"s packaged together with a limited cover on color vinyl. I have been excited about this band since I first heard them. Check out their LP on Putrid Filth Conspiracy. They are more or less a project band since members live in different cities, so it's rare they play live. But the recorded efforts are sure to leave you pumping your fist in the air.

color vinyl sold as a set with alternate cover.