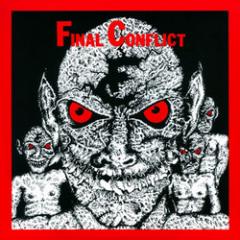 I am very excited to be re issuing this 7". Final Conflict were from Minneapolis MN (the better known California band came a little later) and played great rampaging Midwestern hardcore. This band is not too well known, even here in Minnesota, but once people hear this 7" they are going to be back on the front pages. Powerful and aggro hardcore similar to contemporaries like Negative Approach, the State, Mecht Mensch or Die Kreuzen. This 7" was recorded in 1983 and is re issued by permission of Reflex Records. Recorded at Blackberry Way by Steve Fjelsted and produced by Bob Mould of Husker Du.

In the family/ The lines have faded//Your/ Self Defeated