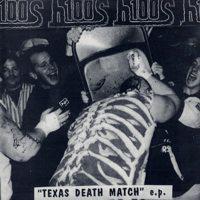 Cleveland Ohio's h-100's blast out crucial early 80's style raw thrash. The singer was a teenage kid with a really snotty voice. The rest of the band were thirty-year-old record collector dudes who were there when hardcore ruled and didn't forget. Although the h-100's claim 80's Japanese thrash as their main influence this record reminds me more of early Die Kreuzen, Poison Idea, Toxic Reasons or many other Midwestern thrash bands of the 80's. Pro-wrestling is a big influence on this band as evidenced by the cover. H-100's were notorious for their outrageous live shows which usually featured fireworks, wrestling moves and throwing everything that wasn't nailed down. In fact the whole Clevo Chaos Schtick really started with these guys. The music just screams Chaos and Destruction at top volume.

H-100's also released the Dismantle 7" in their own Bloodclot label, and the Distort Cleveland 7" on Burrito Records. After singer Chris quit and moved to Chicago the rest of the band continued with Steve on vocals and became the first line up of Nine Shocks Terror. Wedge and Tony went on to be in Gordon Solie Motherfuckers as well. Chris was later in Upstab and now Avon Ladies. This 7" was almost called "So What if We're on Havoc".