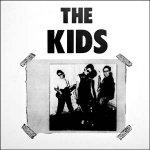 The 1978 self titled LP from Belgiums punk legends The Kids. To my mind one of the very best of 1970's punk records and one of the greatest punk records of all time. This record sold well on it's release but has been long out of print and the band faded into obscurity overshadowed by the better marketed UK and US bands. In my world this record rocks harder and has more punk power than all the household name punk bands of the 70's like the Sex Pistols and the Damned. The Kids cut right to the essense of punk, and indeed rock and roll music, by fusing the high energy and rebellious spirit of 1950's rock and roll with 77 punk. The songs on here are all classics and have gained a cult following with collectors and fans through bootleg releases. Now Havoc and Sonik have teamed up to re issue this classic LP on vinyl with the approval of the band. Included are two bonus tracks not on the original LP and an insert with lyrics and a few photos (the original had no insert). The lyrics are not going to win any nobel prizes for literature, but they are truly punk and steeped in snotty defiance of authority. Songs like "Fascist Cops" and "Old DJs" capture the spirite of 77 punk like no others. Havoc has done the vinyl only, co release with Sonik Records of Montreal. Sonik has also issued the first two Kids LPs on CD.

Seeing these guys live at Chaos in Tejas was a once in a lifetime gig I'll never forget. Watching these guys still going after 30 years and still having a great time and rocking hard was just too good to be true. Rock N Roll "It's my life 'til I die"