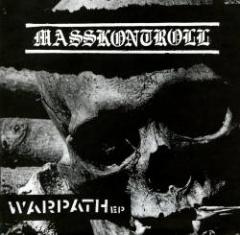 Masskontroll were a wicked brutal Portland band heavily influenced by mid-80's Swedish and Japanese thrash hardcore. The Avskum, Warcollapse, Anti-Cimex, Crude SS, No Security, Swedish "dis" sound is unmistakable. Totally heavy riffs and crushing power. The song Genocide is of course a Heresy cover. Masskontroll took on serious political issues and confronted apathy in the punk scene (see the essay on the lyric sheet). Masskontroll went on to record an LP on Mind Control and did a split 7" with Heartline from Czech. Before this record went to press there was a fucked up test pressing with the wrong songs in the wrong order. There were 20 test pressings of the fucked up version and 20 test pressings of the final version that was released. Kelly did up covers for these and they were passed around the collector scene. Masskontroll was one of the bands that set the standard for the now prolific Portland crust/hardcore scene. Their sound, look and image are still influential in current releases. After Masskontroll Kelly went on to Detestation, and Severed Head of State. Kelly also played in Clusterbombunit, Suicide Blitz and Murder Disco Experience. Adam played in Deathcharge.