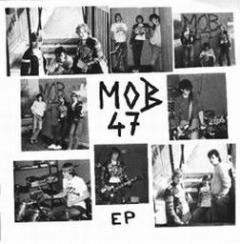 At long last an official re issue of this most classic Swedish hardcore 7". Mob 47 took the anger and intensity of early 80's Swedish hardcore and injected it with the speed and high energy of American Thrash. The result is some of the most powerful hardcore of the early 1980s. Recorded in 1984 these 8 tracks, one of which appeared on the PEACE comp, sent a shockwave through the world of hardcore. Powerful, fast and angry hardcore from some amped up young Swedes. This record has been bootlegged and re issued several times in different forms, but it's my intention to re produce the record as close to the way it dropped back in the 80's. The packaging is almost the same as the original except we've added a bunch of never before seen photos on the back of the insert.  Mob 47's lyrics are the product of the cold war era and the shadow of nuclear war that hung over the 80's. While the cold war might be over, the cry for social change and protest against oppression of songs like "Ingen Framtid" (without freedom) and "Polisstat" (Police State) ring just as true today. And we can't disagree with the sentiments of a song like "Det Är Upp Till Oss" (It's up to us). Perhaps these are sentiments borne of youthful idealism, but the 20 plus years since this records release shows that there is no shortage of war and injustice in the world to provoke outrage.  This record has been highly influential in the world of hardcore from crust, to grind to thrash.  Mob 47 have been playing gigs again and we hope to bring them to the USA to play some time in the future. Also looking into releasing more Mob 47 material soon, their new tracks rip just as hard as the classics. You can check out Mob 47's website at http://www.mob47.se for more up to date info. I'm not too crazy about Myspace, but there are some new tracks and videos posted on there as well.   Incidentally, this is the 47th 7" release on Havoc.