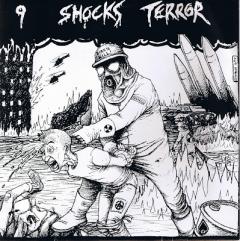 Over the top hardcore from Cleveland Ohio. There is a very strong early 80's influence here but by no means a "retro-HC" record. I would describe this a perfect mix of old Japanese HC bands like Gauze and Lip Cream with early US Hardcore bands like DRI, AOF, and Siege. Features Wedge and Erba of H-100's and Gordon Solie Motherfuckers, as well as guitarist Mike who only appeared on this Nine Shocks 7" but went on to be in a post 2000 line up of Integrity. Cover art by Shaun of Gordon Solie/Knife Fight. Nine Shocks Terror have bludgeoned audiences across Europe and from scene to shining scene in the USA. Their performances at Thrash Fest 2 and 3 as well as the 2001 NC Thrash Bash were some of the most outrageous live shows I've ever witnessed.

Nine Shocks has a split ep with Devoid of Faith, an earlier ep called Earth Wind and the Shiek Throwing Fire, the Zen and the Art of Beating Your Ass LP on Havoc, the Paying Ohmage LP on Sound Pollution, and a 2003 european tour EP that was also released with a DVD.

Side A: Mobile Terror Unit/ 9th Symbol
Side B:Make Your Point/ Backing Out