Power Songs for the Kids 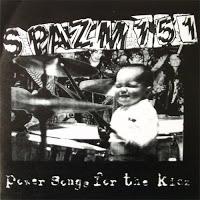 From Dallas, Texas, Spazm 151 were around for the later half of the 90's and early 00's. Before recording this 7" for Havoc Spazm put out a self released 7". I would liken Spazm 151's sound to mid 80's US hardcore like Battalion of Saints, Black Flag and mid period Poison Idea. You can't go wrong with straight ahead hardcore punk like this. Spazm 151 released a boss full length LP on Mind Control in the summer of 2001, as well as a split LP with React. Spazm 151 broke up in 2002. Ex Members went on to Waking Terror, Kegcharge and Damage Case.

Side A: Slow Down, Goin' Nowhere, Keep In Touch
Side B: Junkie Frenz, Don't Fight, Power Song