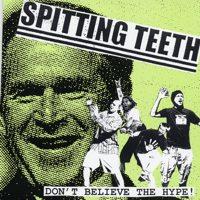 Spitting Teeth came to my attention when they were still called the Shit Bastards. They gave me a demo at Chicago Fest which I really enjoyed. I managed to see them in Seattle while on tour with DS 13 and again with Nine Shocks Terror. Their "Legacy of Cruciality" 7" became a quick favorite, and I was stoked when I found out they were interested in recording a second 7" for Havoc. Spitting Teeth play wicked fast thrash. The drumming and riffage approaches grind core speeds but is still pure hardcore thrash. The lyrics are humorous, yet pointed critiques of society and the state of the scene. Seven of the songs on this 7" are critical thrash core and the last song, Hell to Pay is more of a AC DC or later SSD inspired hard rocker. Spitting Teeth later broke up, but not before recording a split 7" with 1-2 Go Crew (Ben Crew of Damage Deposit's SE Hip Hop project).