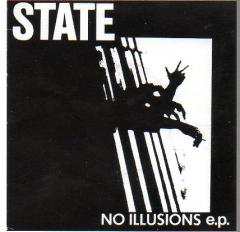 Ann Arbor Michigan's the State, are one of the rawest and most powerful hardcore bands of the early 80's. Sadly overlooked, the State has had a cult following among collectors and hardcore maniacs in the midwest since the glory days of the early 80s. After a dodgey European bootleg of this 7" the band, Havoc and Grand Theft Audio have teamed up to give this lost classic a proper re issue. Recorded in 1983 by the State with production assistance from Ron Asheton of the Stooges, this is totally icindiery raw, pissed off early 80's hardcore punk. The anger and raw energy on this disk capture the frustration and angst of growing up punk in Reagan's America. Musically it's a raw hardcore assault on the lines of Discharge, Negative Approach, Necros or the Fix.  We took great pains to re produce the original layout and artwork and mastered the vinyl from the original tapes.