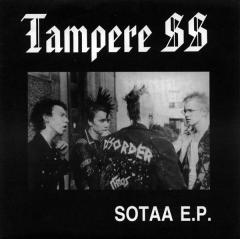 More early 80's Finnish hardcore. This 7" was originally released in an edition of 200 back in 1983 and is now a high priced collector's item. Like the Protesti EP this was licensed from Fight Records who did a Finnish re-press. Tampere SS played chaotic fast hardcore in the best Finnish tradition. The Finnish scene in the early 80's was very prolific with some good labels (Propaganda, Poko) and was heavily influenced by the English scene of the day, such bands as Discharge, Chaos UK, Disorder and the Varukers.