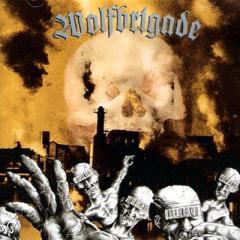 Wolfbrigade was formerly known as Wolfpack and had to change their name due to a biker gang of the same name with questionable political leanings. As Wolfpack they had two excellent LPs one on Distortion and one on Farewell as well as a 7" and split 7"s with Audio Collapse and Skistsystem. Wolfbrigade plays heavy Swedish crust core and is frequently compared to Skistystem. A few layers below the brutal crust assault is an underlying Motorhead sort of groove that gives the music a certain gritty drive. Unlike a lot of crusty hardcore records each song on this release really stands out (as opposed to blurring together) and some display a more punk or metal influence to the same tried and true Swedish HC formula. The melodic guitar leads come from traditional Swedish punk and add more depth to the raw assault of the heavy riffs. There are some smoking tracks with guest female vocals as well. Lyrics deal with pollution and the environment, alienation from society, the vicious trap of chemical and alcohol abuse, and personal freedom in a world of repression.