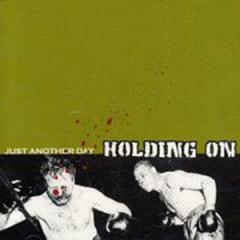 Holding On released a split 7" with Real Enemy on Havoc (with 1% records). Since then their sound has really intensified. Holding On mixes late 80's SE hardcore styles of Judge and Chain of Strength with the early 80's punk/HC sound of Negative Approach and SSD. This record is packed with power and energy. The vocals are raw and pissed off, screaming with the alienation of modern life. The LP was recorded and produced by Tim Mac, who has recorded and produced most of Am Rep's material as well as numerous local bands over the years. As a result the sound is loud and clear and the energy really comes out in the music with the intensity of a live show. This LP was a joint project between 1%, THD and Havoc Records. Following this release Holding On recorded the Question What You Live For LP for Bridge 9 records. Karl and Andy went on to join local metal core band Martyr AD who had and LP on Victory.