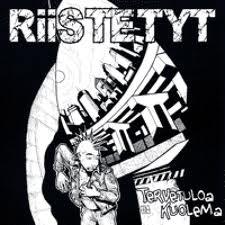 Riistetyt (pronounced reestatoot, means Exploited in Finnish) was one of the greatest Finnish hardcore bands of the early 80's. Their Skitsofrenia 12" is my personal favorite Finnish HC record. Riistetyt changed it's line up in the mid 80s and eventually mutated into a totally different glam sounding band called Holy Dolls. When I heard that Riistetyt would be playing at the Lepakko festival in 1999 I was a little dubious. Would they play glam or hardcore? Would it be washed up, or still have some fire and power. I was really suprised when they played, one of the best performances of the weekend. Riistetyt had returned and playing some awesome traditional Finnish hardcore mixed with some modern crust influence. Fight records released this 7" and asked if I would be interested in doing a US pressing with a bonus track. Finally the end result is a 7" that stacks up with Riistetyt's material of the 80s or with more contemporary Scandinavian hardcore bands like Kaaos, Totalitar or Skitystem. Really heavy, driving hardcore that will make you question your bleak soulless existence on this doomed earth.

Plus a pressing on Fight Records with a different cover.